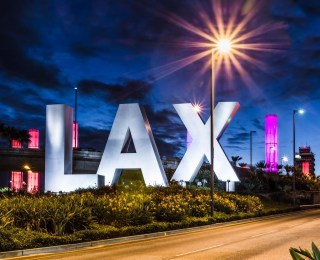 “Passengers ran through security checkpoints without being cleared,” the American Alliance of Airport Police Officers  said in a statement. “Furthermore, passengers who had already gone through clearance were running out of the airport onto the tarmac, which gave them direct access to planes. Many left luggage that could have explosives in it unattended.”

The statement carried a provocative headline –“Could Terrorists Be Testing Our Airports” — but the text did not elaborate. The source of the sounds that triggered the massive incident that were apparently mistaken for gunfire remains a mystery.

Despite the officers’ organization’s statement, LAX officials Wednesday released a report showing security response had improved “dramatically” since the killing of a security officer at the airport.

But the officers’ group didn’t seem too impressed.

“The point is, a bad guy does not have to be too sophisticated to be able to figure out that if someone just yells ‘shooter,’ all bets are off and TSA clearance immediately becomes free flowing and airplanes become accessible in the unfolding chaos,” the statement said.

“Without an armed officer at the checkpoints, the checkpoints themselves become utterly useless in a time of confusion and chaos,” the statement said.

“And without real-time access to cameras, airport police are hamstrung in having one of the most essential tools in assessing the legitimacy of situations like those that led to pandemonium …”

Despite the officers’ organization statement, LAX officials Wednesday released a report showing security response had improved “dramatically” since the killing of a security officer at the airport.

“Once again, we are all witness to a chaotic situation that has exposed security gaps at the nation’s airports,” McClain said.

He restated the group’s call for an officer to be stationed within 300 feet of TSA checkpoints, and for airport police to have “unfettered access to all closed circuit camera systems in each airport.”

The AAAPO is comprised of thousands of rank-and-file airport police officers across the country, including many “dual police/aircraft rescue firefighters,” who stand as the first line of defense against terrorist attacks, hijackings and other criminal activity at airports, the organization said.

Following the fatal shooting of a Transportation Security Administration officer in 2013, LAWA’s closed-circuit system was increased to 2,500 cameras, including 400 high-definition cameras inside the terminals, 150 at exterior locations and 350 analog cameras replaced with digital ones.

Airport officials came under fire in 2013 about troubles communicating information with passengers during the shooting at subsequent investigation. On Sunday, the airport made its first use of the Wireless Emergency Alert system both at the onset and end of the emergency-response portion of the incident. The system delivered public-safety messages to all smartphones within a five- mile radius of the airport. Airport Operations also used the airport’s internal notification system to inform airport stakeholders.

LAWA also spent more than $2 million on systems to provide visual messages inside the terminals and audio announcements inside and outside the terminals. On roadways leading into the Central Terminal Area, 14 changeable message signs were deployed and regularly updated on the status of the investigation.