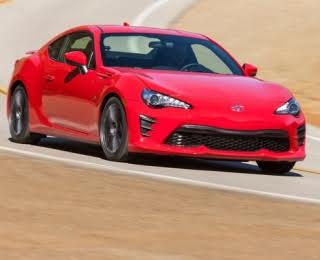 The 86 feels exactly like the kind of car that it was designed to be, a first or second car for Millennials who appreciate an affordable price and are willing to overlook the little details, like a push-button start or an easy-to-find key slot in the trunk. The 86 retains Scion's primitive infotainment and audio system, which feels like a cheap aftermarket set. We didn't come away feeling like it was entirely ready for prime time.

Toyota did more than just give the car a new name. It added some improvements.

The changes are mostly cosmetic. There's a new shape to the grille in front, some vents added to the sides just ahead of the front roof pillar and a new 86 logo. There are new LED headlights. Inside, the red piping on the seats has been replaced by a single-color interior — black in the one we drove.

What remains is the Subaru-designed 2-liter engine, a boxer-style motor in which the pistons are arranged differently than in conventional engines. It comes with either a six-speed manual or automatic transmission. The engine develops200 horsepower with the automatic and 205 horsepower with the manual, a boost of five horsepower over the outgoing Scion.

The pep was adequate, though not breathtaking. The high-revving engine lives up to expectations for fun. What we didn't like was the automatic transmission, which seemed to hesitate a bit at times as we slogged the car up hills and around corners in Ojai (pronounced OH-hi), a horse-country enclave north of Los Angeles.

The engine is good for an EPA-estimated 24 miles per gallon in city driving, 32 mpg on the highway and 27 mpg overall with the automatic transmission, about 3 mpg worse with the manual transmission. Because it's a sports car, far more buyers actually opt for the manual instead of the automatic, even though sticks and clutch pedals are out of fashion these days. To help those who aren't expert at manuals, the car has a feature that holds it on a hill to keep the car from rolling backward as your foot is going from the brake pedal to the gas.

We soon ditched use of the automatic and depended more on the paddle shifters, which did the trick. True to its sports car billing, the 86 has nimble handling and a nice, tight turning radius. And it makes you feel like you're driving a performance car, with touches like the cool red needles on the speedometer. On the downside, the visibility front and back isn't great because of the car's low-slung design.

As you zip around, it's reassuring to know the 86 has Toyota's suite of safety gear, including six air bags.

Even though it is now a Toyota, the 86 is still expected to be affordable compared with other new cars. It starts at $27,120, including $865 in delivery charges.

What Stands Out
New name: A Scion gets a promotion
Handling: Nimble
Automatic transmission: Stick with the paddle shifters
2017 Toyota 86
What? A fun little sports coupe
When? On sale now
Where? Made in Japan
How much? Starts at $27,120, including $865 in delivery charges, with the manual transmission
What makes it go? A Subaru-developed four-cylinder 2-liter, boxer-style engine
How thirsty? Rated at 21 miles per gallon, 28 mpg on the highway and 24 overall for the manual; 24 miles mpg city, 32 mpg highway and 27 mpg overall with the automatic transmission
How big? 13.9 feet long

Overall: Retains its youthful vigor, but may not be grown-up enough as a Toyota