Mazda Has An All-new CX-9. Will Anyone Notice? 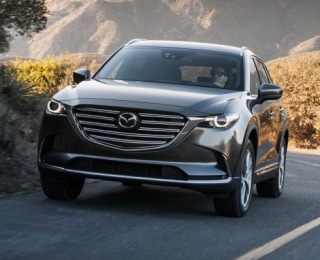 Mazda makes great cars that are underappreciated in the U.S. market. With the exception of the Miata, cars made by this Japanese also-ran are generally not big winners here.

Is it poor marketing? A weak dealer network? A question of styling? I’m not sure, but it’s an unfortunate fact that most buyers will look at Honda, Toyota, Nissan, Hyundai, Kia or Fiat without slowing down to think about Mazda.

The 2016 model features a new four-cylinder, turbocharged, 2.5-liter engine that replaces the 3.7-liter V6 that powered the earlier version of the CX-9.

Proprietary to this vehicle, the engine is peppy, despite its rather anemic sound. It has torque that starts low in the rev range, especially in “sport” mode, pulling hard from corner to corner and up and down the hillier sections of Los Angeles.

At first it seemed to me that the engine and transmission had some difficulty agreeing on what gear they liked, especially during hard acceleration. I corrected this by driving the CX-9 in sport mode, using the manual stick-shift option — not a great way to maximize the fuel economy, but a good way to control the power.

The CX-9 is also sleek and silent on the freeway, as I discovered during a weekend trip to Big Bear. The suspension feels plush, and the comfortable interior absorbs most of the road and tire noise.

At highway speeds, the CX-9’s various safety and driver assist programs proved the equal of those present in much more expensive vehicles. The adaptive cruise control system, which Mazda calls “radar cruise control,” is among the best in the business. It slows down and speeds up gracefully, as traffic conditions deteriorate and improve, and will bring the CX-9 close to a complete stop without any of the jerkiness I’ve experienced in other vehicles.

More surprisingly, the crossover crosses over and handles itself very nicely off the pavement too. I drove about 20 miles of Big Bear’s unpaved Skyline Drive. While this route presented no challenging mud pits, rock gardens or snowbanks, the CX-9’s all-wheel-drive felt sure-footed and nimble on the uneven surface.

There’s ample legroom and headroom in the first and second rows, though the third row — where seats fold down to create extra storage space — will be reserved for pets, packages and small people only.

The generous cabin size is augmented by very good visibility all around, visibility that’s increased by an effective rear-view camera when backing up.

The interior systems required no special education. Everything is within easy reach. The dashboard is spare and clean, the dials are easy to read, and the knobs and buttons are intelligently placed and differently sized, which makes them easier to distinguish without having to take your eyes off the road.

The Bluetooth-based phone system booted up first try, and stayed booted — not always a given. The navigation system was similarly intuitive and seamless.

But the climate-control system required a little patience, as the “auto” settings invariably seemed to be blowing far too much air into the cabin or none at all. After a week in the car, I never did figure out how the car was deciding to reach the temperature setting I chose.

The ergonomics were also a little awkward. I found myself banging my right knee against the inside of the center console, no matter how far forward or back I adjusted the seat. I also found that reaching both the seat belt and the door handle required a little extra planning. Grab the seat belt as you’re sliding into the car, and don’t let the door swing all the way open before you take hold of the handle.

Like the earlier CX-9s, the 2017 model will be available in four trim levels. Base model CX-9s are available from $35,120. The Signature version I drove cost quite a bit more than that, because of the many comfort, convenience and safety features included in this top-of-the-line model. It comes standard with keyless ignition, hands-free rear hatch operation, 20-inch alloy wheels, telescopic adjustable steering wheel, rear cross-traffic and lane-departure warnings, lane-keeping assist and half a dozen other accouterments.