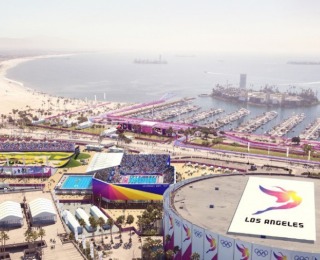 Three existing venues have been added to Los Angeles' bid for the 2024 Olympics, including Long Beach as one of four main sports clusters.

LA2024 announced the additional venues Thursday, emphasizing its use of existing venues to avoid costly construction and cost overruns that have plagued Olympic host cities in recent years.

Long Beach's arena, convention center, waterfront and pier would comprise one of four main sports clusters scattered around the Los Angeles area as opposed to having a single Olympic Park. The city joins the other clusters of downtown Los Angeles, the South Bay near Torrance and the San Fernando Valley.

The LA2024 bid committee said each cluster will be located within a secure perimeter where fans can walk between venues with food, music and celebration sites. The clusters are connected to the region's public transit system.

The venue changes will be included in LA2024's second bid file that is due to the International Olympic Committee on Oct. 7. The IOC will select the 2024 host city in September 2017. Los Angeles is competing with Paris, Rome and Budapest, Hungary.

Rome Mayor Virginia Raggi on Wednesday rejected her city's bid, although her motion to withdraw the bid would have to be approved by Rome's city assembly.

Long Beach's venues are located 24 miles south of downtown Los Angeles. The athletes' village would be on the UCLA campus on Los Angeles' west side.

Honda Center in Anaheim would host indoor volleyball, bringing the Olympics to Orange County, with the 18,000-seat venue that is home to the NHL's Anaheim Ducks located about 26 miles from Los Angeles. It would be about an hour drive from the athletes' village.

In LA2024's original plans, volleyball was to be played at UCLA's Pauley Pavilion. Instead, that 13,800-seat basketball arena would host wrestling and judo.

Historic Riviera Country Club in Los Angeles would host men's and women's golf. The course has hosted the U.S. Open, two PGA Championships and the annual PGA tournament since it opened in 1929.

Adding sites in Long Beach and Anaheim would bring the Olympics closer to the large populations in Orange, Riverside and San Bernardino counties.

LA2024 said UCLA's tennis center and north athletic field have been added to the track and field stadium as part of the training center located at the athletes' village in an effort to reduce additional travel for competitors.

"We're very pleased to add more world-class existing venues to our fiscally responsible and innovative Games Plan for 2024," LA2024 chairman Casey Wasserman said. "By relying on Southern California's wealth of top sports, housing and transportation infrastructure, LA 2024 will minimize construction risk, operational struggles and costs, and can focus on providing athletes with the perfect stage to perform their best, without distraction."