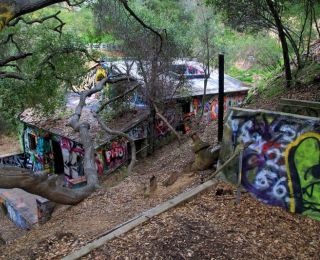 Tucked into the Santa Monica Mountains overlooking the Pacific, just past the McMansions of the Pacific Palisades, lie the decaying, graffiti-plastered remains of what is believed to have been a 1930ís compound for Nazis in Los Angeles.

A few years ago, I first hiked out to Murphy Ranch, the abandoned compound, after hearing about it (ironically) from an Israeli friend who was obsessed with LAís weird side. After returning a couple times, I went again this summer because the city of Los Angeles, which owns the land, announced this past spring it was tearing down some of the structures.

After parking the car alongside the neatly manicured lawns off Capri Drive in the Palisades and beginning the walk along the road that hugs the dusty mountainside, past the mega-mansions being built into the hillside and a semi-buried pickup truck, I eventually came to what used to be the entrance to the ruins.

A few years ago an ominous set of black gates with crumbling flagstone wallsónow torn downómarked the entrance to the site. Now a person just has to hope they go the right way, following the path until they find the first of the ruins' famed sightsóthe 500-odd concrete steps leading down a terraced landscape to the compound.

In 1933, the property that now makes up the ranch was bought by one Jessie M. Murphy. This name is believed to be a front, historian and head of the Palisades Historical Society Thomas R. Young told the Los Angeles Times. (Young did not respond to Daily Beast requests for an interview). The property was really bought, he says, by the heiress Winona Stephens and her husband Norman while under the influence of a German who claimed to have supernatural abilitiesóHerr Schmidt.

Under his influence, Young told the Times, the Stephens sunk roughly $4 million into the property. Herr Schmidt had convinced them that Hitler was going to take over the world, and that the U.S. was going to collapse, so Nazi sympathizers needed a stronghold for when it was time to emerge and take control.

While it is believed the couple ran out of funds before they could build their planned four-story mansion (designed by, no joke, the famed African-American architect Paul Williams, whom they hired to replace another famed architect, Welton Becket), the $4 million they did spend resulted in a terraced mountainside for agriculture, a sprinkler system, a 20,000 gallon fuel tank, a power station that could support a small town, a 395,000-gallon concrete water tank, and of course, those long concrete stairs.

The concrete stairs (there are actually multiple sets) lead down to the famed power station of Murphy Ranch. Before it was filled in this spring, the remains of the concrete water tank were set 30 feet in the ground and filled with magnificent graffiti, but unfortunately the city got sick of rescuing trapped graffiti artists and it was filled in this year.