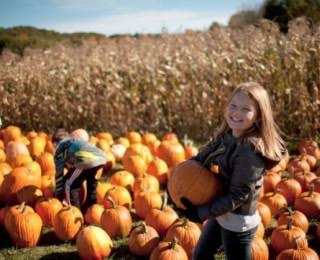 As the warm days start to give way to long, cool nights, Patch has compiled a list of fun fall activities with and without the kids.

Apple picking at Oak Glen: Just 90 miles east of Los Angeles, Glen Oaks is a an autumn wonderland where you can pick apples and fall flowers, press your own cider, taste apples and pies, make cider and and candles and experience life as the colonials lived it. The mile high town offers dozens of apple orchards and restaurants to choose from.

The Harvest Moon Celebration is a 2,000-year-old Chinese tradition celebrating the end of the summer harvest, and the Huntington Library carries on the tradition. The Sept. 27 Harvest Moon Celebration features live music, offerings from 30 Chinese and Asian-inspired restaurants and the new Boone Gallery exhibition, “Gardens, Art, and Commerce in Chinese Woodblock Prints.” The celebration takes place in the gorgeous setting of the Chinese Garden. The celebration starts at 6:30 p.m. Admission is $98.

Knott’s Scary Farm runs from the first day of fall to Oct. 31. And for anyone who’s never been, it is truly terrifying. The only thing scarier than Knott’s Scary Farm’s gangs of evil clowns, starving zombies, and roving cannibals are its mazes. This year’s mazes are: “Fright Lane with Skeleton Key,” “Paranormal Inc.,” “Red Barn,” “Shadow Lands,” “Special Ops: Infected,” “The Gunslinger's Grave: A Blood Moon Rises,” “Tooth Fairy,” “Trick or Treat,” “The Dead of Winter: Wendigo’s Revenge,” and “Voodoo - Order of the Serpent.” Tickets start at $40 and season passes are $90.

Universal Studios’ Halloween Horror Nights will curl your toes. Rides, shows and mazes featuring your favorite horror film villains will haunt our nightmares. This year, fright night runs most Thursdays through Mondays until Nov. 5. This year’s mazes include, “American Horror Story,” “The Exorcist,” “The Texas Chainsaw Massacre,” “Freddy V. Jason,” “Halloween,” and “Krampus.” Other attractions include, The Walking Dead attraction, the Terror Tram, the new Jabbawockeez Show, and scare zones. Tickets start at $64 and climb as Halloween nears.

Oktoberfest at Alpine Village in Torrance is the largest Oktoberfest in Los Angeles, and it’s the next best thing to being in Munich. It runs through Oct. 29 and features family fun days throughout the month. It’s all about the beer, food and music.

The Los Angeles Sheriff’s Department’s 3rd Annual Haunted Jail & Halloween Carnival at Crescenta Valley Station on Saturday October 22 features family friendly, spooky Halloween fun. The day includes costume contests, games, crafts and a moonbounce. The Twilight Show for the little ones is $5 and the scarier Tour of Deadwood is $8.