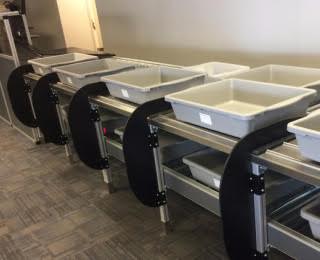 Innovation lanes, first introduced this summer by Delta Air Lines at Hartsfield-Jackson Atlanta International Airport, use multiple conveyor belts to allow five passengers to simultaneously unload bags, shoes and clothes into bins to be screened by the TSA.

Airline officials say the lanes speed up the TSA screening lines because the multiple conveyor belts eliminate bottlenecks caused by travelers who are slow to unload their baggage and personal items. Other passengers using the lane at the same time can simply slide their bins around the slower traveler.

In addition, the screening processes won’t be slowed by a shortage of bins because one conveyor belt is dedicated to rolling empty bins to passengers in the screening line.

The two lanes will be the first of at least nine additional innovation lanes expected to be installed at LAX by the end of next year at various terminals, according to airport officials.

United Chief Executive Oscar Munoz praised the new lanes, saying in an interview that he hopes they will help United better compete against its rivals for passengers at LAX, one of the busiest airports in the country.

He said he is urging employees at LAX to combine such improvements with a friendlier attitude among the staff to win over new fliers.

“You can’t do just one thing,” Munoz said.