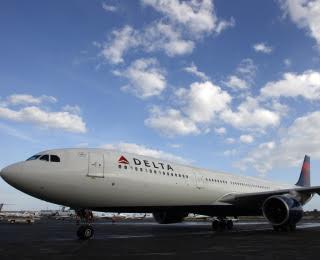 A Samsung tablet wedged under a seat on a Delta Airlines flight began smoking when it overheated - causing the plane to be diverted.

Emergency services met flight DL138 from Detroit at Manchester Airport after it diverted there on its way to Amsterdam following reports of ‘smoke in the cabin’.The tablet had become jammed under a seat in premium class and left under a seat cover, where it started smoking - and passengers smelt a strange odour.

Maintenance staff at Manchester Airport found the tablet, which had been invisible to passengers and cabin crew and was probably left by a previous passenger.The seat is believed to have been replaced while the Boeing 767-400 was on the ground, before the flight continued to the Netherlands with a three-hour delay.

Some passengers on subsequent flights claimed Delta staff asked them to turn off their Samsung devices. The Federal Aviation Administration is now investigating.Delta has since confirmed that the device was made by Samsung - but not a Note 7 model, which is currently under a huge recall after reports of battery fires.

A spokesman said: ‘The aircraft landed safely and Delta’s maintenance team quickly found the source and the aircraft was cleared to continue its journey.‘The flight arrived in Amsterdam at 2.55pm. The device in question fell below the seat and became jammed, which caused the malfunction.’

A Samsung spokesman told MailOnline today: 'It appears that external factors contributed to this incident. This is not related to the Galaxy Note 7.

We have reached out to Delta to investigate as the cause is yet to be determined.'

The incident comes after a Samsung Galaxy Note 2 phone was said to have emitted smoke on board a passenger jet from Singapore to India on Friday.

The phone was found in the bag of a passenger in an overhead bin after other passengers reported smelling smoke in the plane, IndiGo airline officials said.Etihad Airways temporarily banned the use of the smartphones at the beginning of this month again after reports of explosions from faulty batteries.

On September 2, Samsung announced a product recall of at least 2.5million Galaxy Note 7 smartphones due to a faulty battery causing the phones to catch fire.