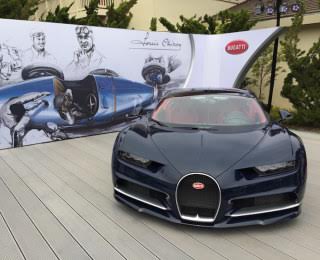 The $2.6 million (before taxes) Chiron is the latest Bugatti to challenge the limits of automotive technology, engineering and performance.

Bugatti doesn’t build cars for the same reason as any other international consumer automaker. Your average automotive firm builds their brands at a volume to please customers, and sensibly so. Even the most high-end luxury or supercar manufacturers create their machines to attract consumers — even if they be the elite, extremely well-funded breed.

That was never the M.O. out of Molsheim, France. Bugatti designs, engineers and sets its cars free upon the world to test the limits of modern automotive science and capability — to see what humans can build, rather than just what humans might buy. It’s not a practical business model. The plan doesn’t sell a high volume of cars. But, the Bugatti quest speaks to the ambitious limits of human endeavor on four wheels.

Until this year, the ultimate expression of Bugatti’s orbital evolution of the automobile was the Veyron. From the outset, it was a vehicle intended to be the ultimate hypercar — a ride that looked down on other supercars from the likes of Ferrari, Lamborghini, Porsche, Aston Martin and the rest. All of those makes and models were elite builds, but they would seem quaint alongside the Veyron.

For 10 years leading up to 2015, Bugatti built four versions of the Veyron: the original 16.4, the Grand Sport, the Super Sport and the Grand Sport Vitesse. When first introduced to the world, the Veyron defied convention with a W16, eight liter, 1,000 horsepower engine. To simplify that engine construction for the uninitiated, a W16 is essentially two V8s joined in matrimony. When you joint Vs at their inner tips, you end up with a W turning a single crankshaft. Mind warping speed did result.

By the time the Veyron Super Sport came along in 2010, Bugatti added an extra 184 horsepower to the pile and produced the world record speed for a production car of 269 mph. That record would stand until 2014 when the Hennessey Venom GT knocked down 270 mph. The Veyron would retire a year later and look to its successor to reclaim the speed records for Bugatti.

The next step in elite automotive engineering arrived this year with the new Bugatti Chiron. Debuting last March at the Geneva Auto Show and making more noise at the Goodwood Festival of Speed this past summer, the Chiron didn’t take subtle step up in specs from the Veyron. It hopped a missile to the moon.

Named for legendary Bugatti racer and Monaco circuit fixture Louis Chiron, the car is a massive, two-door coupe like the Veyron. But, the Chiron upgrades its eight liter, quad-supercharged (…That’s four superchargers…) W16 engine to 1500 horsepower.

That engine on its own weighs more than a complete Smart Car. So, to keep the rest of the Chiron’s weight down, the car’s body is completely carbon fiber. Even with that high-tech construction, the Chiron still has a curb weight of more than two tons.

With such heft, you might expect this latest Bugatti to be a step slower than its predecessor. Actually, you know better. The car is limited for street driving to 261 mph. Considering that the Chiron’s limited speed sits just nine ticks below the world record the Veyron set in 2010, it should be no surprise that the dinner plate speedometer dominating the car’s instrument panel reserves notches up to 310 mph.

Such a number might be insanely optimistic and dangerous for even the most skilled consumer driver, but Bugatti officials are confident the new Chiron will ravage the current world speed record of 270 mph and clock in around 288 mph once the limiter is switched to off. That’s the kind of speed that distorts human senses. It’s dangerous and foolhardy — maybe even irresponsible. And I can guarantee the minds behind the car could not care less. If it can be done, Bugatti will do it.

There are plenty of other engineering flourishes that separate the Chiron from its lessers. The massive engine requires three radiators for cooling. The side panel events that assist that cooling process and help to steady the car at speed stretch from roof to road along the Chiron’s doors. And, the automatically rising rear spoiler can also pivot to act as an air brake that provides more stopping power than the brakes on your car.

Only 500 of the Chiron will be built — all priced to move at around $2.6 million. (In case you were worried about Bugatti not turning over volume sales, how many sets of wheels do you need to sell at $2 million+ to stay flush?) Such dollar sign numbers mean it’s a car so few will get a chance to drive that practically no one will get a chance to drive it. It’s the rarefied air, both in performance and market — and that defines Bugatti’s identity.

You can get about as close to a Chiron as one can hope in the gallery below.