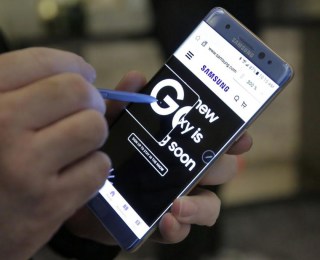 If you travel with a Samsung Note 7, you’re likely on the honor system when deciding whether to use or charge the device during a flight. The Federal Aviation Administration said Thursday night that because of recent fire reports involving the smartphone, passengers shouldn’t use or charge one or stow one in checked baggage.

It is very unusual for the FAA to warn passengers about a specific branded product. The agency said it acted after Samsung reported the incidents involving the phones.

The three biggest U.S. airlines — American, Delta and United — said Friday that they were studying the FAA warning but it was unclear how they would make sure that passengers keep the Samsung devices powered off.

A Delta Air Lines spokesman, Morgan Durrant, said “For now, we are studying this.”

American Airlines spokesman Ross Feinstein said the company is speaking with the FAA, but had not made any changes in policy for passengers and what technology they can bring on board.

Spokesman Luke Punzenberger said United was reviewing the FAA’s guidance and would “raise awareness with our employees and passengers about these devices.” He said flight attendants would change their safety announcements as soon as Friday to include a mention of the Samsung phone.

Singapore Airlines is already prohibiting the use or charging of the phones in flight, and Australian carrier Qantas said it was requesting that passengers not use them.

Safety experts have been concerned for several years about the fire risk when lithium-ion batteries are used or even carried on flights.

In February, a UN aviation panel recommended that nations adopt a temporary ban on cargo shipments of rechargeable lithium batteries on passenger airlines, although the policy wouldn’t apply to batteries inside devices like phones, laptops or tablets.

Samsung announced a worldwide recall of the Note last week.