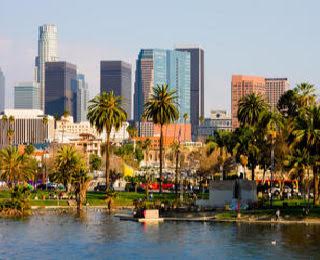 Los Angeles is big. Really big. Four million residents, 503 square miles, and the third-largest metropolitan GDP on the planet. Within the city limits, you will find six Fortune 500 companies, hundreds of languages, and millions of families. And alongside that thriving economy and culture, you will also find a commitment to reducing traffic, pollution, and rising temperatures.

Like every other American city, L.A. is confronting climate change. Between 1878 and 2005, temperatures here rose four degrees. They are likely to rise another four by mid-century. The groundwater supply meets less than half of the city’s water needs. Wildfires are coming fast and furious. And despite a lot of work, L.A. smog is still at alarming levels.

But this city is not resigned to a dirty fate. On the contrary. LA. is taking steps to become as well known for its clean environment as it is for its entertainment industry, warm weather, and sandy beaches.

Over the past decade, L.A. has become a hub of green building activity. In 2002, L.A. became the first big city in the United States to require virtually all new municipal buildings to be LEED certified, and in 2009, it raised the bar by upping that requirement from the base “certified” level to LEED Silver, which calls for an even greater commitment to sustainability from each new municipal building that appears in the skyline. In 2008, the city adopted its first-ever Green Building Program, which requires any large, new construction or major renovation to meet LEED standards.

L.A.’s leadership on green construction and sustainable building has driven statewide progress, specifically in the form of the CalGreen building code that governs new construction. Today California leads the nation in LEED-certified square footage and total number of certified projects.

That’s why Los Angeles is the perfect host for this year’s Greenbuild, the world’s biggest conference and expo dedicated to green building, so the 25,000 green building professionals and enthusiasts who are convening here Oct. 5 can see the incredible strides that have been made. We’re touring showcase projects, learning from amazing speakers, and celebrating with each other at the Los Angeles Convention Center—which was recently recertified LEED Gold.

Greenbuild presents the perfect opportunity to reflect on the past, present, and future of our sustainable economy and sustainable world.

Over the past two centuries, the world has pursued economic gains at the cost of our environment. We have melted icecaps, razed forests, and torn the earth apart in our quest for continued economic growth. But what if I told you we don’t have to choose between a healthy planet and a healthy economy?

From 2011 to 2014, the green construction market alone has generated $167 billion in GDP, provided $148 billion in labor earnings, and supported over 2.1 million jobs. And the sector is only projected to grow over the coming years—creating jobs, bolstering the economy, and contributing to a more sustainable world.

The green economy overall has driven immense economic growth and resilience to date: the United States’ “clean economy” employed more than 2.7 million workers in 2011, according to a study by the nonpartisan Brookings Institution—more than either the fossil fuel or bioscience industries. During the Great Recession, the clean economy outperformed the nation as a whole. And the Brookings study found that the clean economy actually offers more opportunities and better pay for semi-skilled workers than the national economy as a whole.

Add in the fact that buildings account for almost 40 percent of carbon emissions in the United States, and changing our building and manufacturing industries to be greener is a no-brainer.

Our past does not have to define our future. The choices we make right now—those are what can make the difference. That’s why it’s so crucial for cities all across America to create healthier and more sustainable buildings, streets, and communities. That’s exactly what L.A. is doing.

Los Angeles’ commitment to big, bold sustainability positions the city as a leader in this effort, and helps inspire green builders and green cities all over the world. The conversation that the 25,000 people at Greenbuild are about to have is an important part of that leadership. And I’m proud to be having that conversation in L.A.