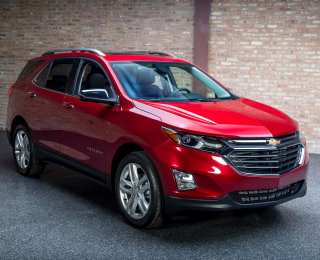 Intent on grabbing a larger share of the hot compact crossover/SUV market both here and abroad, Chevrolet unveiled an all-new 2018 Equinox. The remake leaves no doubt the next-gen Equinox is destined to be a higher-profile player than the vehicle it replaces when it comes to battle rivals like the Ford Escape, Honda CR-V, Mazda CX-5, Nissan Rogue and Toyota RAV4.

The 2018 Equinox rides on an all-new platform that shares much with the one found under the new Buick Envision. Marginally lower and wider than before, this 5-passenger Chevy hauler also is 4.7 inches shorter and has jettisoned nearly 400 pounds as part of its revamp. While the wheelbase also gets trimmed by 5.2-inches -- to 107.3 inches – the upgraded architecture reduces the turning circle by 10 percent and actually adds 3.5 cu. ft. to its interior volume

The 2018 Equinox wraps its stiffer, stronger structure in sleeker, more refined bodywork and LED-infused front/rear lights that add sophistication to the vehicle's look. Inside, the cabin reflects Chevy’s latest design thinking and matches more upscale trim bits with one of two MyLink infotainment systems that offer support for Android Auto and Apple CarPlay as well as an available OnStar 4G LTE Wi-Fi hotspot. Although its second-row split bench no longer has fore/aft adjustability, the new fixed design maintains just as much legroom and the backs now fold virtually flat for greater utility while creating up to 63.5 cu ft of cargo space.

Motivation for the 2018 Equinox will be supplied by three turbocharged 4-cylinder engines, starting with a gasoline-burning 1.5-liter making 170 horsepower and 203 lb-ft of torque. By summer, it will be joined by GM’s 2.0-liter gas engine delivering 252 horses and 260 lb-ft of torque as well as the automaker’s new 1.6-liter turbodiesel expected to make 136 horsepower and 236 lb-ft of torque while returning 40 mpg highway. While the 1.5-liter and 1.6-liter engines will be backed by a 6-speed automatic, the 2.0-liter gets teamed with GM’s new 9-speed autoshifter. The Equinox will be available with front-drive as well as a switchable on-demand AWD setup that decouples the rear axle when not in use to improve fuel efficiency.

Chevy will offer a host of new safety/driver-assist features that will be standard or optional on the 2018 Equinox. The existing Lane Change Alert with Side Blind Zone Alert and Rear Cross Traffic Alert will be joined by a new Lane Keep Assist with Lane Departure Warning, Forward Collision Alert with Following Distance Indicator and Low-Speed Forward Automatic Braking systems. Also new for 2018 is a 360-degree Surround Vision camera, Safety Alert Seat and the Rear Seat Reminder alert introduced on the 2017 GMC Acadia. More details about the 2018 Chevrolet Equinox as well as pricing will be released closer to the on-sale date.