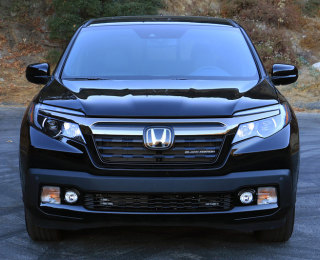 For Americans, the pickup truck is something of a sacred cow. There’s a long-held set of conventions that many truck buyers consider obligatory – a body-on-frame platform is chief among them, along with purpose-built hardware like four wheel drive transfer cases and a solid rear axle.

Our voracious appetite for trucks caught the interest of Japanese automakers decades ago, but Toyota and Nissan have, for the most part, stayed close to the traditional playbook in hopes of luring buyers away from established standards offered by American nameplates.

But the truth is that for the vast majority of truck buyers, these designs are overkill for the kind of use their trucks see regularly, and that established formula has its own inherent drawbacks for everyday drivability.

When Honda first introduced the Ridgeline in 2005, they approached its design from a different perspective, focusing on offering the utility of a pickup with the ride comfort, ease of use, and efficiency of a car. It was a risky move, and the first generation Ridgeline proved to be somewhat polarizing to truck buyers both for its appearance and its car-like underpinnings.

But the clever design features found throughout the Ridgeline won it something of a cult following that kept the first generation pickup in production for nearly a decade. After more than a year off the market, Honda has returned to the fold with an all-new, second generation Ridgeline that builds upon the strengths of the original truck while addressing many of the issues that kept truck buyers at arm’s length the first time around.

The 2017 Ridgeline is still a unibody pickup, and it’s based on a front wheel drive chassis shared with the current generation Pilot crossover. However, the Ridgeline gets the strategic use of high strength steel throughout its chassis that the Pilot doesn’t. For those who are rational enough to have not already dismissed this truck out of the gate, there’s also a number of other improvements throughout the second generation Ridgeline.

Honda sought not only to bolster the truck’s capability, but improve ride, handling, and aesthetics. That last one proved to be a deal breaker for a lot of folks, as the first generation Ridgeline’s looks were considered awkward by many.

This time around Honda has chosen to go a more conventional route with the truck’s bodywork. The much maligned buttresses between the top of the bed and the cab of the old model have been replaced by a more traditional truck bed that’s four inches longer than before, and the tapered front end gives the Ridgeline a more contemporary look that’s visually in line with rest of Honda’s current offerings.

Motivating the new Ridgeline is a naturally aspirated, 3.5-liter SOHC V6 that makes 280 horsepower and 262 pound-feet of torque. It sends the power to the front wheels through a six-speed automatic as standard while all-wheel drive is optional. There’s enough grunt on tap to get the truck to 60 miles per hour from a standstill reportedly almost two seconds faster than the previous model, but with a curb weight of over 4,500 pounds and transmission that’s a bit slow to make decisions, its pace still falls short of anything resembling urgency.