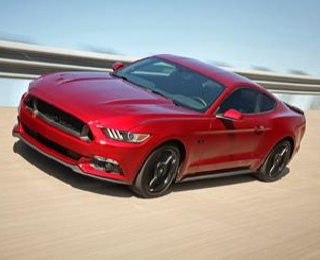 The Ford Mustang received a major overhaul last year to mark its 50th anniversary, and the update included something for just about everyone. The 2016 model doesn't alter the formula dramatically, aside from the addition of the new Sync 3 infotainment system and several cosmetic tweaks. It's also available with some new options packages, including the California Special exterior treatment on the GT Premium trim we tested, which adds to its already eye-catching looks. For performance purists and weekend racers, the Mustang still features a venerable 5.0-liter V8 engine on the GT trim, which makes for a seat-pinning ride. And that makes it one of the best pony cars yet, as well as one of the most fun vehicles you can buy.

The Mustang GT trim starts at $32,395 and adds a 435-horsepower, 5.0-liter V8 engine. Standard features are equivalent to those on the regular EcoBoost trim, but add upgraded brakes, electronic line lock, and launch control.

The GT Premium we tested has a base price of $36,395 and comes with essentially the same standard features as the EcoBoost Premium. It also includes the $1,995 California Special option package that adds 19-inch black alloy wheels, a more prominent rear spoiler, and special exterior and interior trim details. The $1,795 Equipment Group 401A option package includes a 12-speaker Shaker Pro Audio System with HD Radio, blind spot detection, cross traffic alert, and driver memory functions. Our test car also came with a $795 SD card-based navigation option and a $395 Enhanced Security Package. With a $900 destination and delivery charge, the final sticker came to $41,375. And finally, the GT Premium Convertible starts at $41,895 and adds the Enhanced Security Package.

With the exception of standard secondary turn signals integrated into the hood vents on all GT models and an available black roof on the EcoBoost and GT coupes, the exterior of the 2016 Mustang hasn't changed much for the new model year. The design deftly balances nostalgia with a modernized look. Interior materials were upgraded on the 2015 model and include metallized dashboard toggle switches and aluminum dash inserts that add a sense rugged cool to the cabin.

Connectivity, Interface, and Technology The biggest change for the 2016 Mustang is the addition of the Ford Sync 3 infotainment system. Like previous iterations of Sync, all connectivity is via a connected smartphone. This means there's no subscription necessary for cloud-connected features, although it can eat into your phone's data plan. The car can also connect to a remote Wi-Fi access point (like a public network), but only while sitting still. Whereas previous Sync systems were updated only via a USB drive, Sync 3 adds over-the-air updates when connected to Wi-Fi, which is convenient.

The Mustang's Sync 3 system isn't exactly brimming with options once you're connected. Currently there are only five apps for iOS devices and four for Android, which are largely the usual suspects, including Pandora, Spotify, iHeartRadio, Glympse, and MLB.com (for iOS). While Ford advertises Glympse as a Navigation & Travel app, it's really a location-sharing tool and doesn't have search capabilities like the Yelp or Google Local Search app available in other vehicles.

That said, Sync 3 remains one of the better OEM infotainment interfaces available. Its sharp graphics and large icons make on-screen information easy to discern at a glance and operate while driving. And its new capacitive touch screen is a lot more responsive than the resistive technology used with the previous MyFord Touch system. It also reacts quicker to input in general, and navigation maps refresh faster.

If you're not sold on Sync 3, however, it's worth mentioning that next year's Mustang will get Apple CarPlay and Android Auto capabilities that bring somewhat overlapping but more varied connectivity (as well as Sync Connect with embedded 4G LTE connectivity).

Given the car's relatively poor rear visibility, we really appreciated the car's blind spot warning system with rear cross traffic alert. The hill start assist also came in handy on grades, especially with the manual transmission. And for weekend racers, the Track Apps feature can capture and store info such as acceleration times and braking distance.

Performance and Conclusions The 2016 Mustang GT Premium's 5.0-liter V8 engine is a pleasure, both in its visceral performance and the aural appeal of its growl. With 435 horsepower on tap under the hood, ample and awesome acceleration is always on tap, and flicking through the six speeds of the manual transmission is nearly effortless.

The Mustang is also surprisingly well-mannered for a muscle car, with a remarkably smooth ride and minimal tire and wind noise. And if you want to trade more performance for a less compliant ride, the GT Premium has four different drive modesóNormal, Sport, Track, and Rain/Snowóas well as three different steering settings.

With the addition of Ford Sync 3, the 2016 model is one of the best Mustangs yet. The prime competition is its long-term muscle car nemesis, the Chevrolet Camaro, which is all-new for 2016. The other major Detroit-based challenger, the Dodge Challenger, can't keep up with the Mustang or the Camaro on a twisty road, and it's not offered as a convertible (though it has a practical back seat and a large trunk). Neither vehicle can boast the long history and continuous production of the Mustang, or match its arguably iconic status. For the money, you won't find a rear-wheel vehicle that's more fun to drive than the 2016 Mustang.